A downloadable game for Windows

Why is your spaceship blue?

Why does your gun overheat so quickly?

Why are there containers of green goo in an asteroid field; Why do they heal you?

Shoot the asteroids and raiders with Z

Dash through the goo containers with X

Dodge things with the Arrow Keys

There is also an optional WASD control scheme titled "Shawn".

I had fun with it. You're UI works really well; even in full screen I could see all I wanted to from the corner of my eyes. This is something I think more action game UI's should try to achieve.

EDIT: You updated the game right after I played it. Ill update this comment later.

The game's getting better! I have no idea what button allows for the one time upgrade purchasing, but having a reason to blow up the astroids is nice. Aside from that, being able to shoot more often makes the game a faster paced and thus more exciting experience.

Thank's for your input! I'll be patching the game with a bunch more upgrades soon. They only show up after you die and have enough gems. So that might be why you aren't seeing it. (There isn't a button for it.)

I got upgrades to work, but I found what might be a bug. One upgrade touts that ships will start dropping gems at the cost of losing the health packs that spawn. Ships were already droping gems and I never saw any health packs at all. (I did get goo drops from ships and astroids, just not any pods.)

Gaining damage is fun; but I don't know what my ships base damage is so a number like +2 is too vauge in its actual value.

I'm not sure what you're looking for in terms of feedback. (If you would like you're players to look out for certain things I'm sure they would if you announced it.)

I was just playing it the other day and noticed that (like you said) the gem carriers are getting spawned without the upgrade. Which I believe only started occurring after I fixed an animation bug, go figure.

Anyways -- as far as damage goes, internally the damage model is bare bones. Everything is stored as an integer, and damage applying functions floor or ceil the decimal in your favor. So if you're dealing damage, the value is rounded up, and rounded down if you're getting hit. Here are all the constants related to damage in the game:

Honestly I'm surprised the game isn't more buggy than it is. The the main source file -- where all  the game code resides in -- is 2600 lines of C, built on a handmade engine, and it's a mess. While I'd love to have the time (and by extension, money) to continue to improve this small game, it's not really an option right now. If you are interested, I've made a DevLog about the state of the game.

Althought it is  sad to see a project shelved, its nice to know of a silver lining. I hope this engine you're making begins to really shine one day. In the mean time, I'll be on the lookout for your various small projects.

Thank you for sharing your game!

P.S. I appreciate how open you were with the details! It's alwasy nice to have closure. 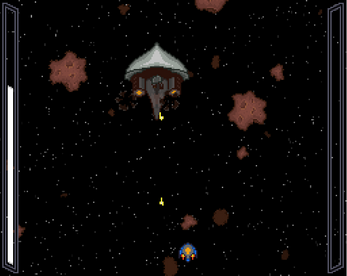